Everything You Need to Know About Becoming a Skydive Jump Pilot

How to Skydive Jump Pilot 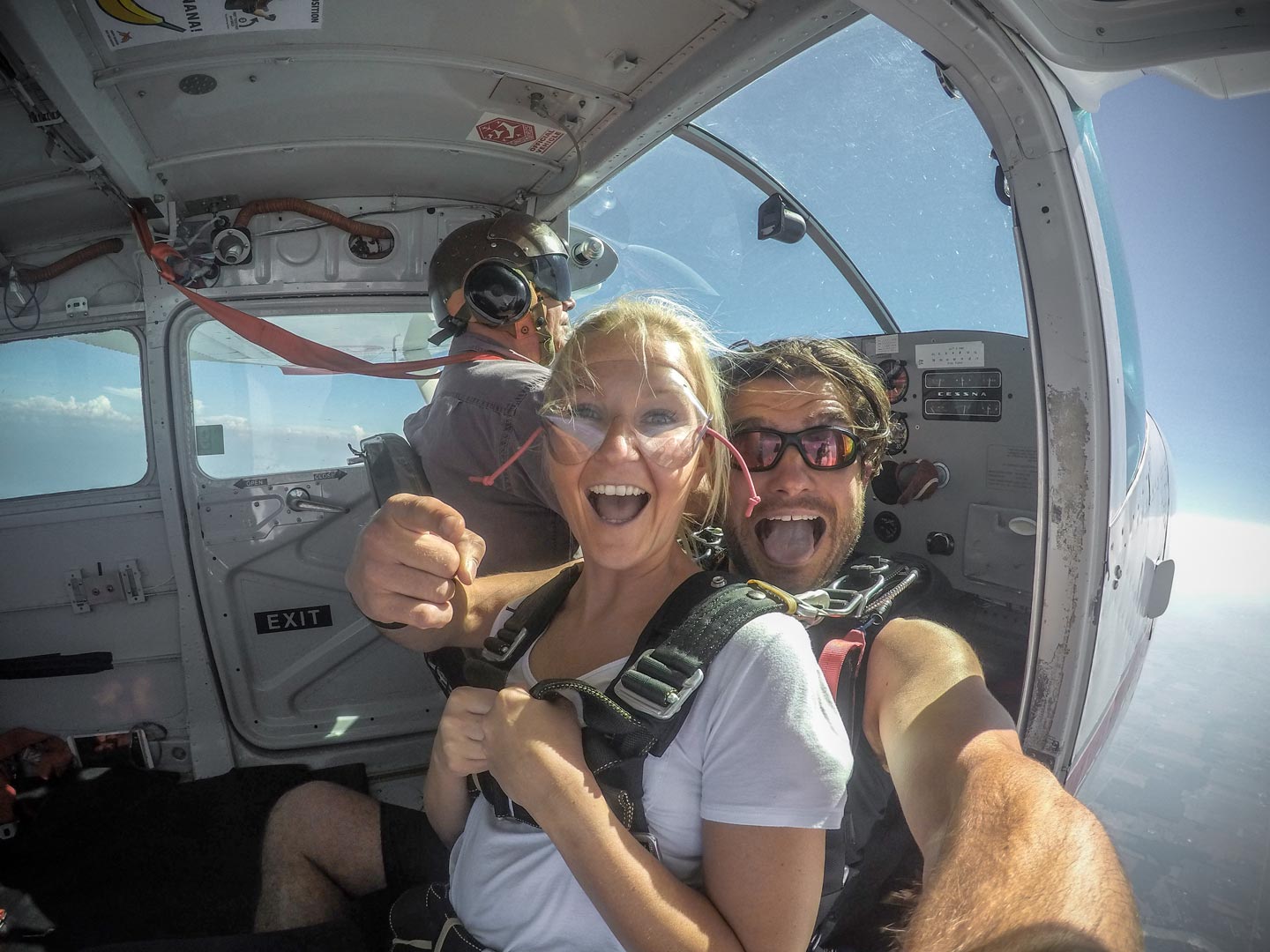 Maybe you just received your CPL and you are looking for your first flying job. Or maybe you have been flying for a while and you are looking for something different. Either way the skydiving community always needs good pilots to get them to jump altitude. The following is an article to help you understand what is required to be a pilot at a dropzone.

Skydivers will jump out of any plane with a door they can open. However, there are a few common airplanes used for skydiving. These are:

There are definitely some more types of airplanes that have been converted into jump planes, but these are the most likely to be seen at a dropzone.

The amount of time required to fly a jump plane is usually based on two things: the insurance requirement and the pool of available pilots. Of course your attitude will also play a role in getting hired if you meet the requirements.

As a pilot who just received a CPL with 300-500 hours you will be limited to smaller planes, such as the Cessna 182. If you have 500 to 1000 hours you could find yourself flying a Caravan, a PC-6 Porter, or a Kodiak if you get lucky. The larger multi-engine planes will require 1000+ hours and multi experience. These are not hard numbers but more of a gauge for how much experience you will likely need to fly the different types of skydive planes.

A Day in the Life

In Canada, most skydiving centres do the majority of their skydiving business between May and October and on the weekends. However, some busier skydiving centers in Canada operate all day all week long during the summer months. As a jump pilot you can expect to be flying on Saturday and Sunday from May to October.

A typical day would start with you arriving early in the morning to untie or push the plane out of the hanger and do your walk around. Typically the first load of skydivers would be between 8-9am. This will be dependent on when the first booking is and also if the dropzone has neighbors they do not want to piss off. The plane only flies when there are enough skydivers to fill it.

Once you take off you will climb to jump altitude, kick out the skydivers, and then descend. A typical climb in a 182 will take about 20 minutes to 10500 feet. When you land back at the dropzone there might be skydivers waiting at the gate to hotload. If there are no skydivers ready to hotload you will shut the plane down and refuel if necessary. You will have lots of takeoffs and landings as a jump pilot.

At busy turbine dropzones sometimes the airplane does not shutdown all day long. If fuels and loads with the engines turning.

Be prepared to sit in the plane all day long at a skydiving centre. You will not be given 15 minute breaks and might not even get a lunch break if it is busy. Be prepared to eat on your way to the toilet and back. Be prepared to fly from sunrise to sunset.

How to Fly Jump Run

Jump run is the term given to the action of flying the airplane in the desired direction of travel at the desired altitude ready for skydivers to exit.

Since skydivers and parachutists are without power they need to be very aware of the wind direction and speed. Skydivers need to exit the plane upwind of the dropzone so that they can use the wind (a tailwind) to fly back to the dropzone landing area. For example, lets say the upper winds looked like this:

These are fairly strong winds for skydiving. While the wind limit in the upper altitudes has a little more flexibility with speed, the wind on the ground is likely capped at 25KT max.  Parachutists always land straight into the wind and 25KT is about as fast as they can travel forward in a normal glide.

If the winds were as above you would want to set the plane up to be flying roughly 270° as you flew over the dropzone. The skydivers would want to exit the airplane on the west side of the skydiving centre to ensure they can fly back to the landing area. Leaving the airplane too early on a day with the winds as strong as above might mean the skydiver opens their parachute downwind and consequently be fighting a 25KT headwind to get back to the landing zone; likely not making it having to find an off-dropzone landing location. Calm days might allow skydivers to exit the plane 1/2 mile downwind of the dropzone landing area and still make it back depending on their parachute opening altitude. Remember parachutists are gliders that cannot ascend. 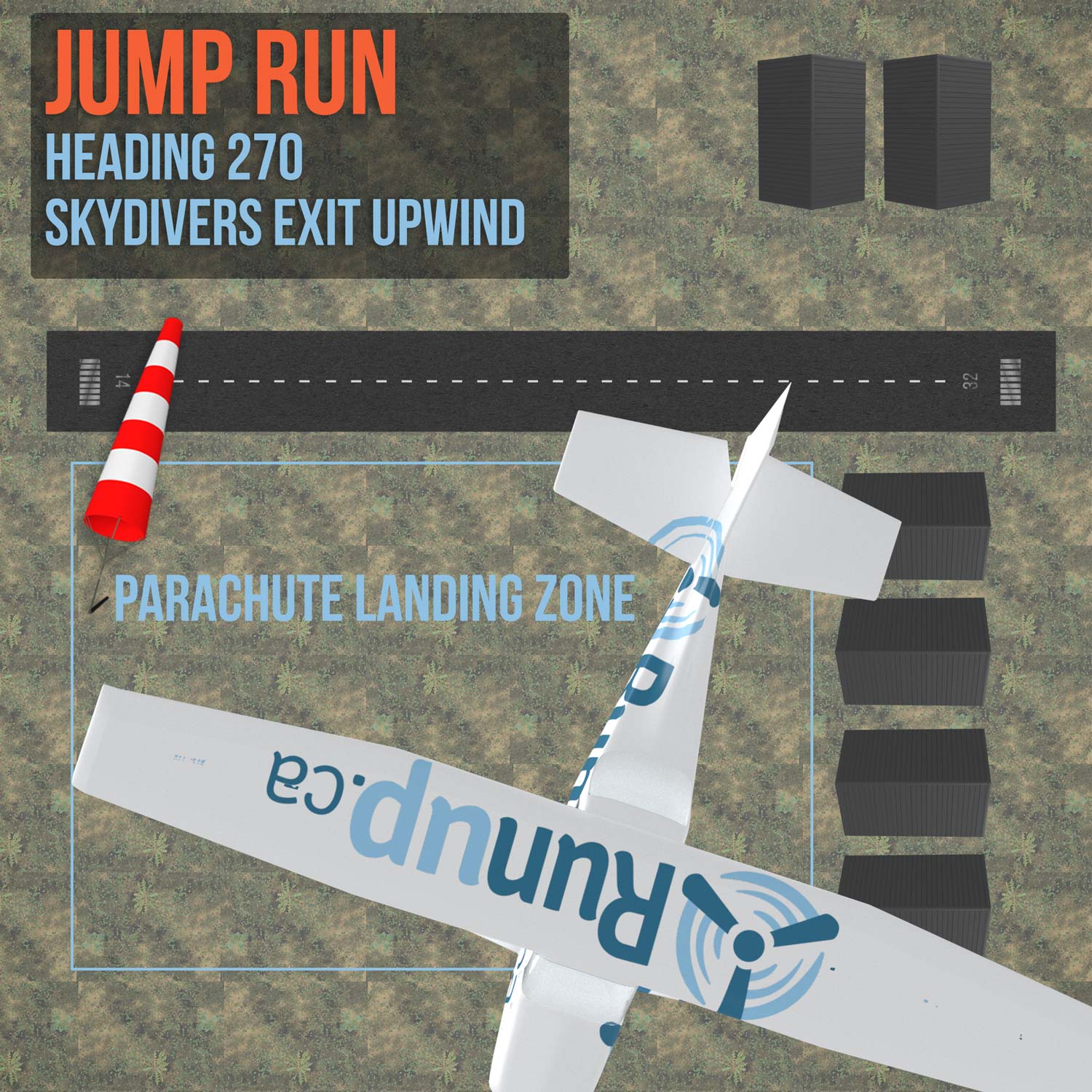 On a strong wind day the skydivers will want to exit the airplane well upwind of the parachute landing area.

Most airplanes are fitted with a customized door. A quick Google image search for “skydive jump door” will produce some images for you. Most smaller Cessna jump planes are fitted with a door that opens up and down with a hinge on the top rather than a door that slides up, left, or right (such a door is used in the plane in the photo just below). To close such a door you will need to slip the plane. Larger airplanes usually have a roll-up door at the rear of the plane that is sometimes left open after the skydivers exit or sometimes closed depending if the pilot has the controls to do so from the cockpit. Some jump planes, such as the Skyvan, have a rear exit door. 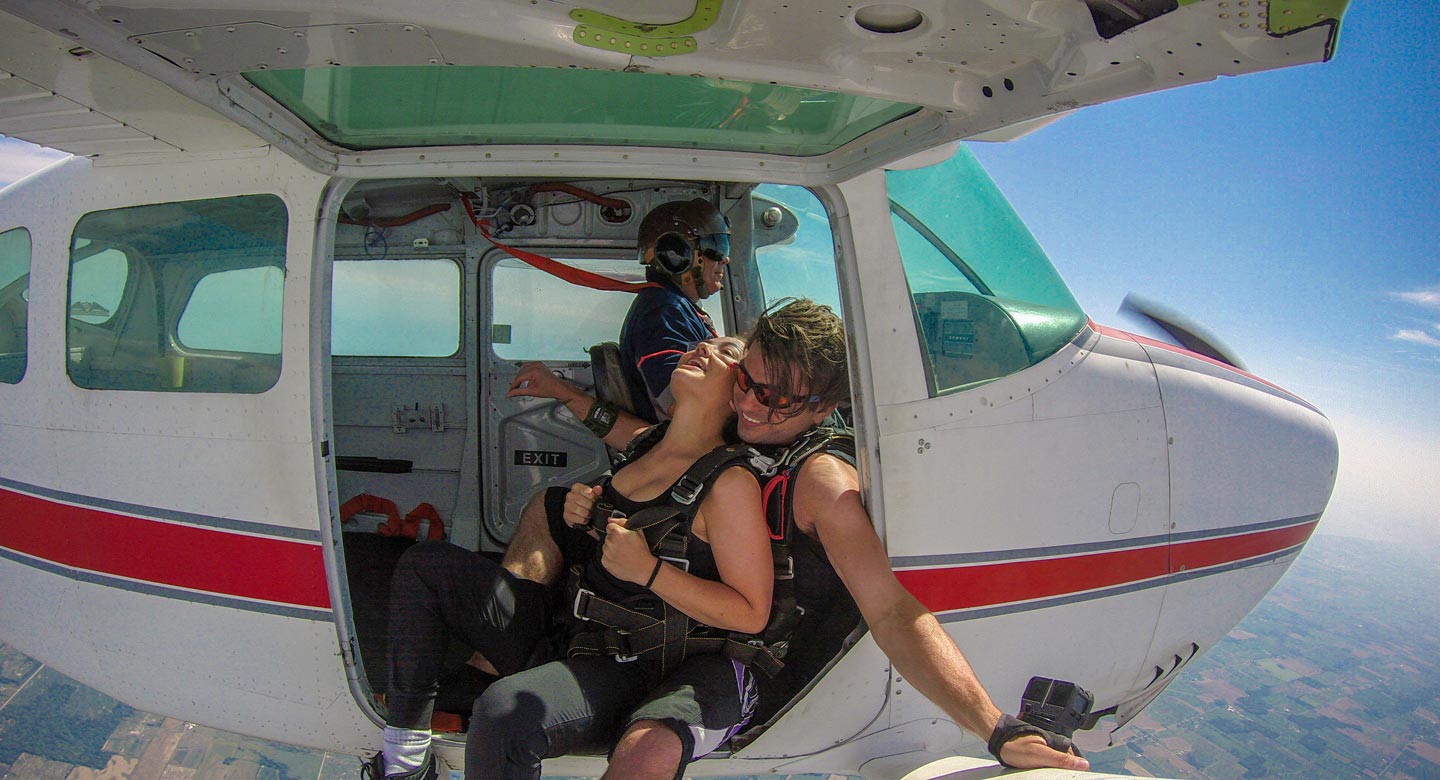 The jump door opens upwards. The wind keeps the door up. The pilot slips the plane to close the door.

Jump altitudes vary and are always given to skydivers in height AGL. Skydivers do not care how high they are above the sea, only how high they are above the ground immediately below them. Some common altitudes are 5000, 10500, and 12500 feet. Sometimes skydive planes will climb as high as 18000 feet if they have oxygen on board or can climb to that altitude so fast oxygen is not necessary. Skydivers normally open their parachutes between 3000 and 5000 feet AGL.

Skydiving is VFR Day only. Skydivers can jump at night, but it rarely happens. Skydivers never jump in the rain. Rain = Pain. However, you still might have to fly in some challenging conditions. Be prepared to fly on cloudy days with very few holes through which to climb. You also might have to land in a direct crosswind quite frequently on grass runways.

Hopefully I have given you some good insight as to what it is like and what is required to become a skydive jump pilot. I started skydiving in 2005, have a tandem skydiving rating and about 2600 skydives. I also have a Multi-CPL with and Instructor Rating at the time of writing. I have done my best to give you accurate information to the best of my knowledge. If you have any questions or comments feel free to ask them in the comments below and I will try my best to answer them. 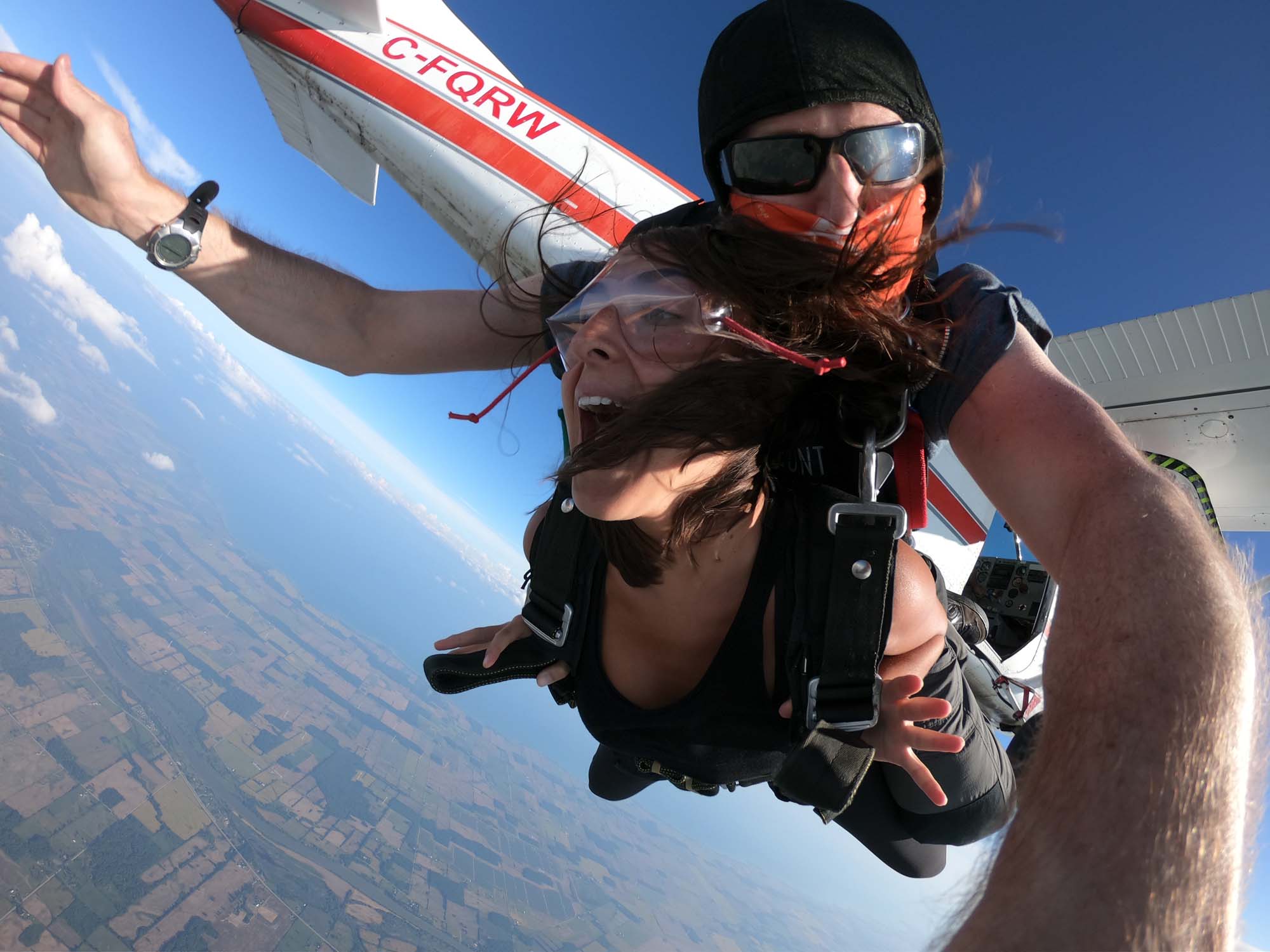 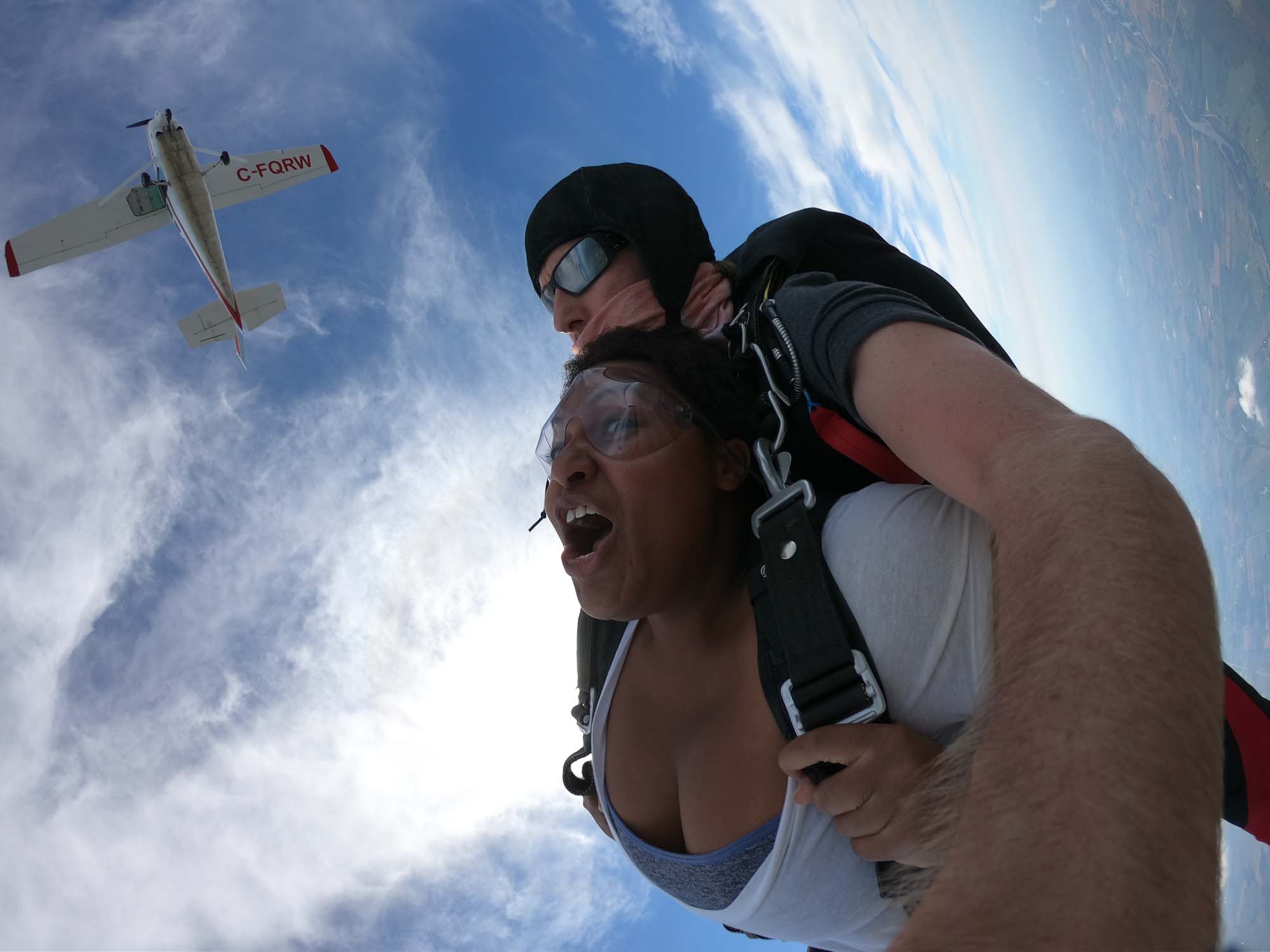 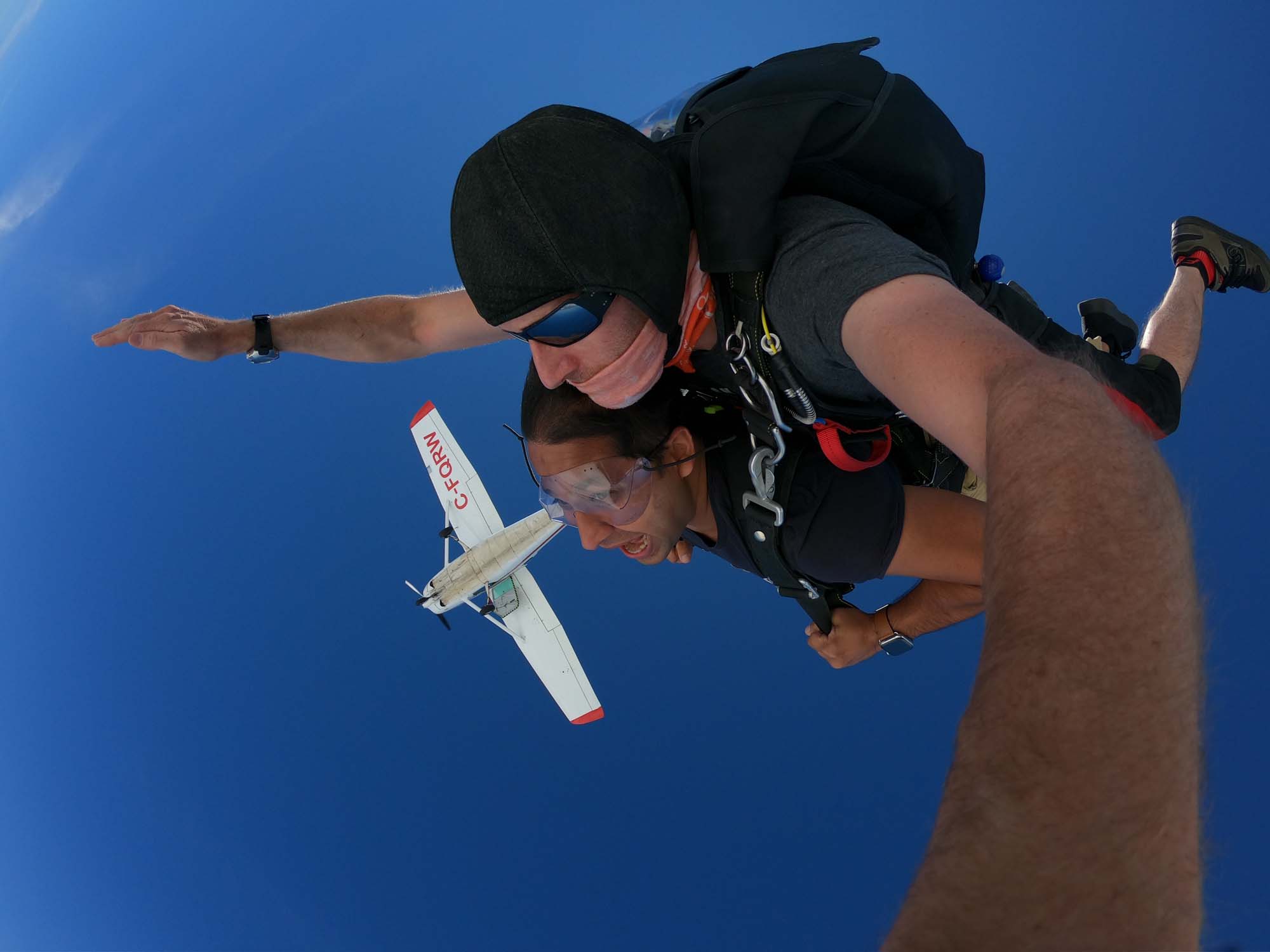 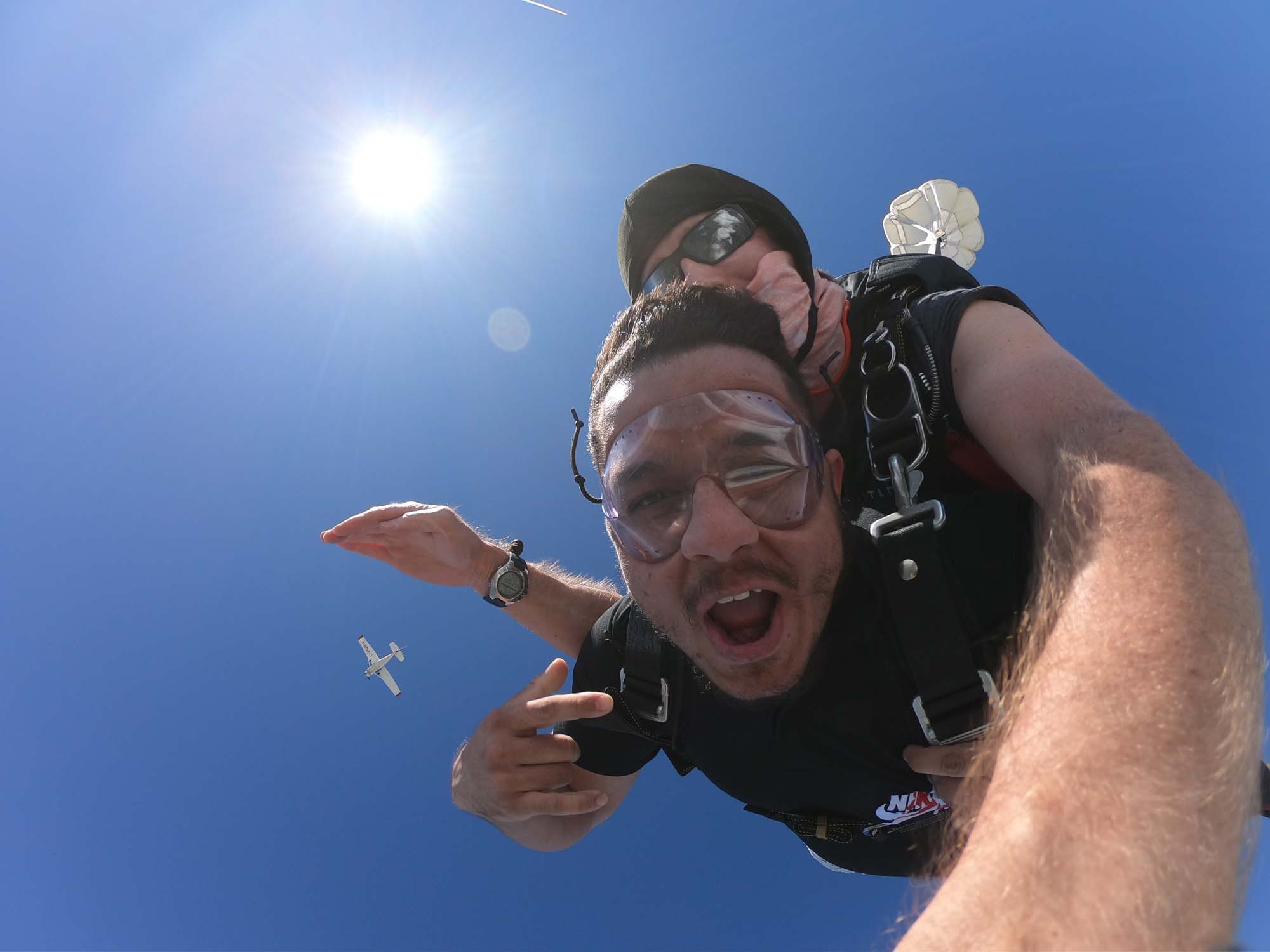 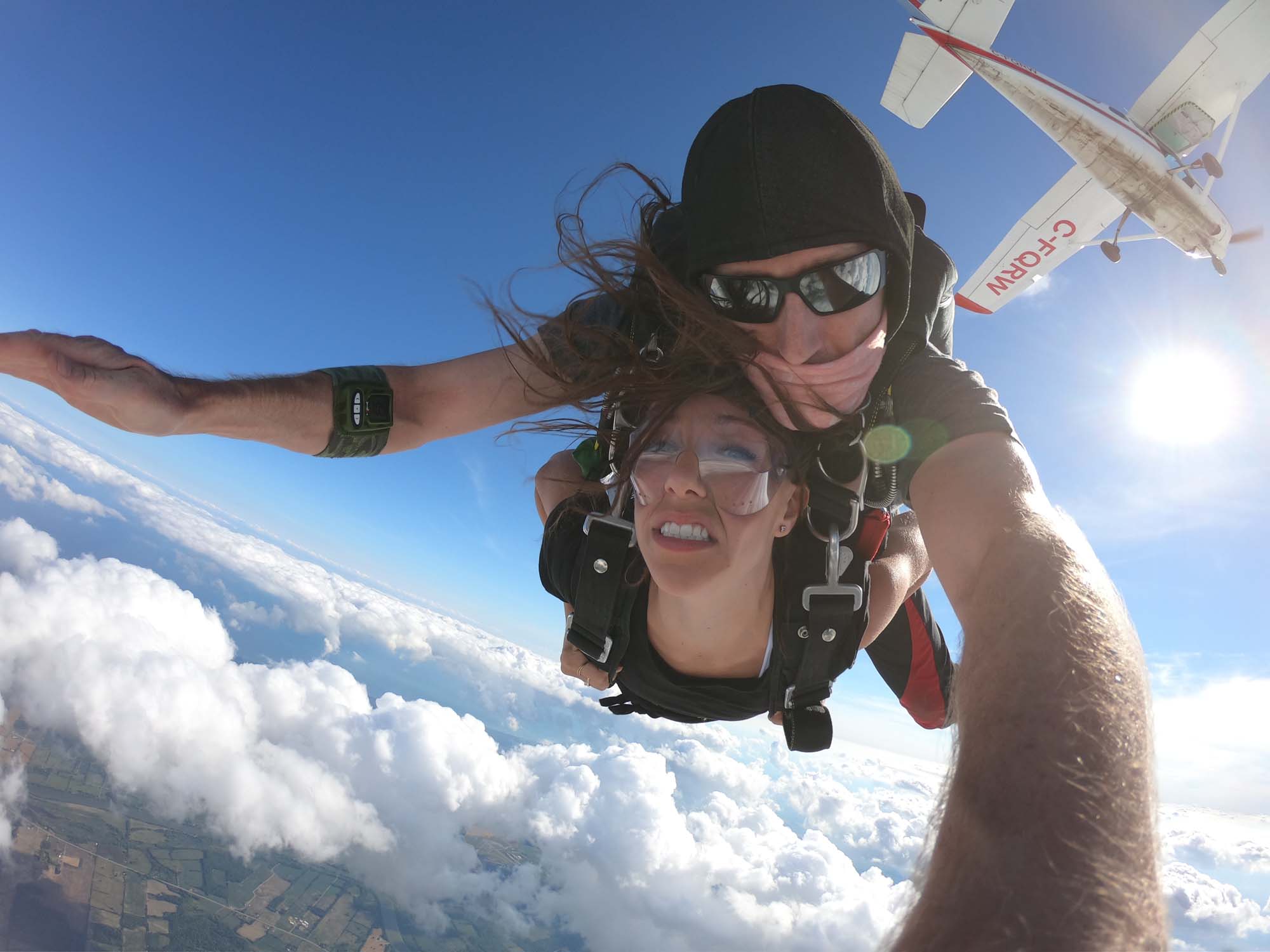 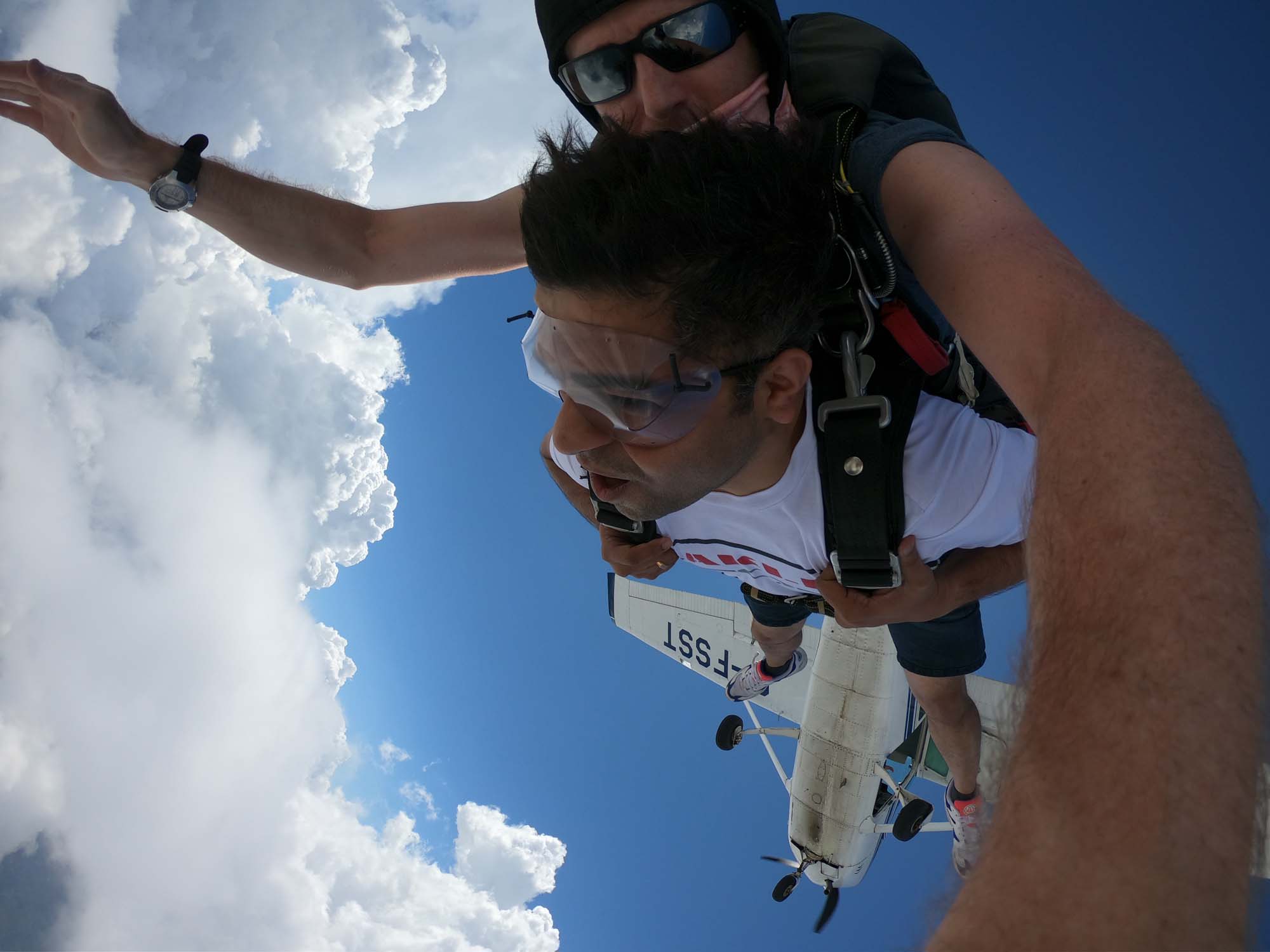 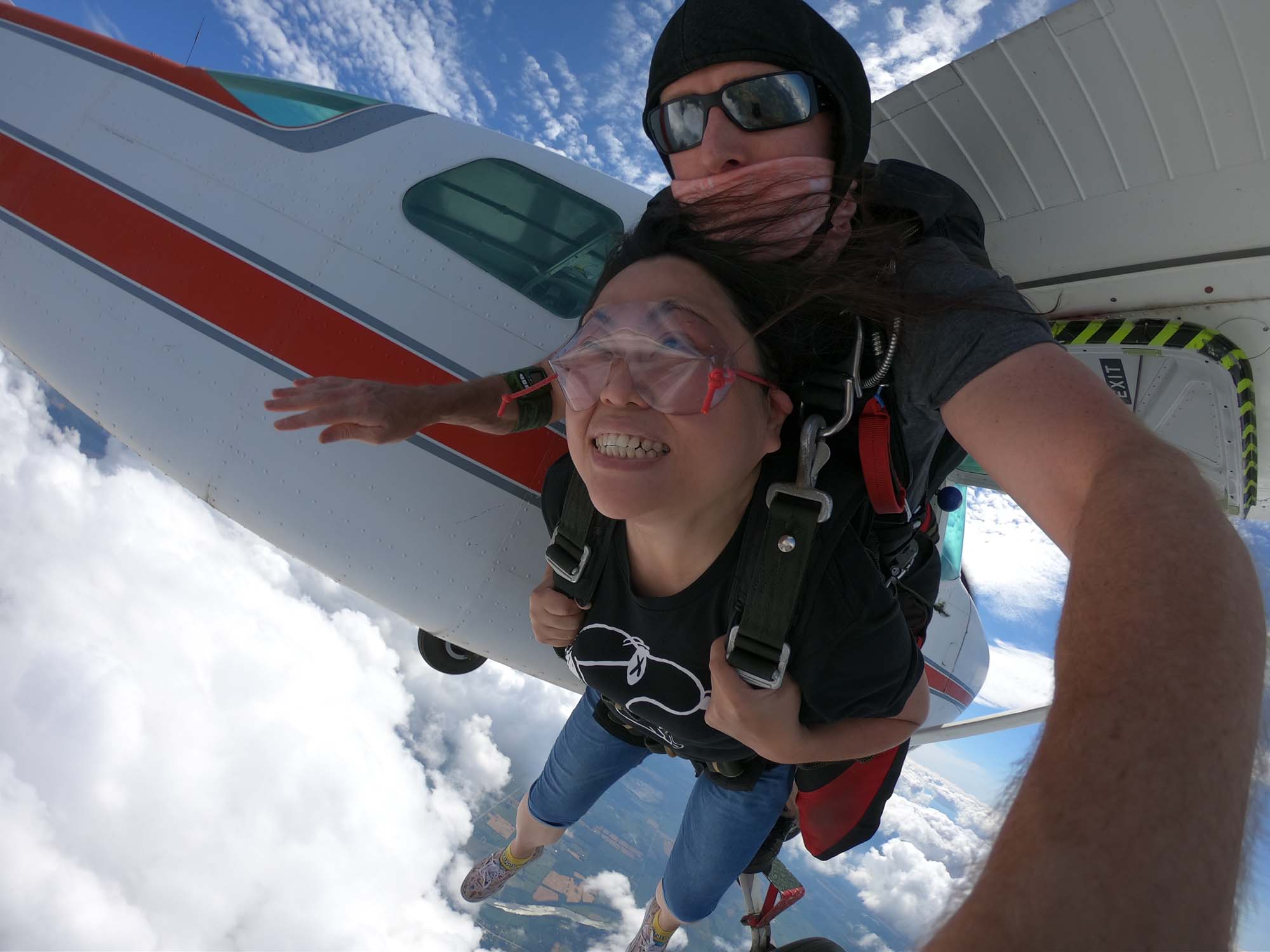