Mastering the ability to control the airspeed and altitude of your airplane. 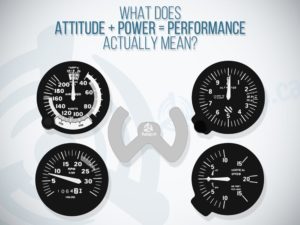 What does attitude + power actually mean?

Mastering the still of using pitch and power in unison to control your airplane is essential. It will undoubtedly raise your ability to control the airplane in the circuit and consequently make your approaches stable. Stable approaches can be described as a consistent airspeed and descent rate. This post has been written to try and add supplementary material to Exercise 08: Descending for flight training in Canada.

Let’s try to figure out what we would do in a likely learning scenario. Say you were cruising at 110 KT at 4000 ASL. You are 10 to 15 NM away from your intended airport of landing. You know there is a slower airplane in front of you and their radio calls indicate they are planning to join the circuit in the same manner as you at the same airport. Your instructor wants you to start your descent at 500 fpm but slow to 80 KT. Assuming you have done all your cockpit checks and your lookout, what do you do next?

What the…??? Reducing my power did not reduce my airspeed! Now what do I do?

You pull the nose up by applying back pressure on the control column. Your airspeed starts to decrease 90….85…80…75KT…shit…too much back pressure. You push the nose down slightly as you have just discovered it is controlling your speed. You have now found 80KT like your instructor has asked. But…

Looking at this scenario your critical error was when you reduced the power to try to lose 15KT of airspeed. You should have kept the power setting where it was and put back pressure on the control column to raise the nose until you reached 80KT. You might have already had the correct power setting to achieve a descent rate of 500fpm.

If your descent rate had settled at 400 fpm after you pitched the nose for 80KT you would need to reduce the power by about 100 RPM and also pitch the nose of the plane down a tiny bit to maintain the 80KTs.

As you hopefully have noticed you mistakenly thought the throttle was the master of your speed. Pitch and power are interdependent with regard to the performance of your aircraft. You need to work both controls together to achieve the desired results.

To reiterate, assume you were in straight and level flight (Exercise: 05) at 100KT. Your instructor asks you to increase your speed to 110KT and maintain your current altitude. You add 200 RPM as you should. (Generally in training aircraft +/-100 RPM will give you +/-5KT or +/-100fpm.) If you do not push the nose down you will start to gain altitude at about 200fpm. If you do push the nose down slightly your speed will increase to 110KT and you will remain at your current altitude. Don’t forget to re-trim!

To conclude, pitch, bank, and power both have the ability to control your airspeed and your altitude. Subsequently, they should be used together. Your Attitude + your Power setting will = Performance.  What it really means is that:

Different combinations of pitch and bank attitudes combined with different power settings will determine the airspeed and the altitude of your aircraft.

Additional Info: It is of importance to know that your pitch attitude can also control your altitude. For example, if you were to configure your airplane just below your airplane’s “flight for maximum endurance” and put your airplane in the slow flight range (Exercise 11) you could control your altitude (and your airspeed) with increased nose up pitch. With this type of power and pitch configuration the increase pitch would slow your airspeed and put you at an angle of attack that would keep you above the stall speed, however you would not be able to maintain altitude. The higher you raise the nose the more altitude you lose provided you do not adjust the power setting. Hence, you would be controlling your rate of descent with your pitch attitude. Obviously you could  control your descent rate if you pitched nose down as well. The further you pitch down the greater your decent rate.

With your instructor you can experiment with different attitude and power settings to learn how different combinations of the two will affect your airspeed and your altitude.